Last week, I showed up one of the Boston Tax Help Coalition’s VITA tax sites: Urban Edge to get my taxes done – for free – wondering why, in my 10 years in Boston, I’d never done this before. 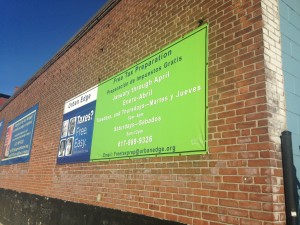 Maybe it had felt like too much hassle. But after doing my own taxes last year, and squinting in disbelief at my bill (“That can’t be right…”), I wanted all the help I could get. I knew I’d made too much to qualify for the Earned Income Tax Credit (EITC) this year, but maybe they could save me money elsewhere?

In the waiting room, I commiserated with my fellow taxpayers, also there for free assistance. Nicole was here because her girlfriend’s tax guy used to do her taxes – but then they broke up. Yolanda came to save the $250 she paid H&R Block last year. 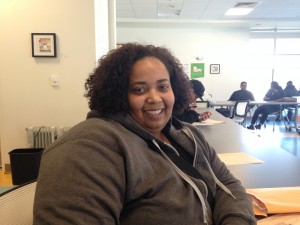 And me? When my name was called, and I met my volunteer tax preparer, Jonathan, I was just hoping he could save me some money.

I was in luck. Jonathan loved tax season more than I thought humanly possible.

“This is just such an excellent program,” he confided, leaning in. “I saw [the Boston Tax Help Coalition’s] ad on the Red Line looking for volunteers, got in on the last available orientation, and now here I am.”

He waved his hand at the maze of cubicles like he’d won the lottery. “It’s amazing. I basically got a free training program and an internship in one. And now I know all this stuff for doing my own taxes.” 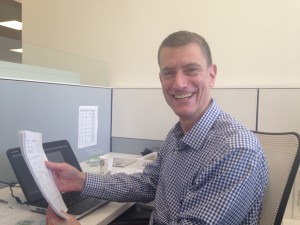 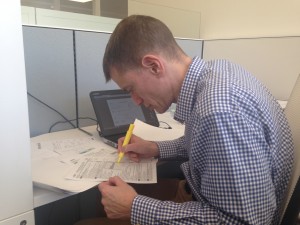 My haphazard 2015 income was going to put Jonathan’s tax knowledge to the test. I had received no W-2s, just 1099s from independent contract work. That made me a sole proprietor. And that meant . . . business deductions!

I had no itemized accounts or receipts on hand, but Jonathan helped me figure out the most conservative estimates on my home office space and cellphone expenses. They quickly added up to $1,300 in deductions.

He consulted his manual, checked with his quality-control supervisor, and at the end, we basked in what felt like a tax miracle: The business deductions Jonathan found dipped my income just low enough to trigger the EITC. I was getting a tax credit!

Jonathan beamed at his laptop screen.

“They should, like, have a bell you guys ring every time someone gets the Earned Income Tax Credit!”
We high-fived instead.

I’ll be honest. I spent a long time at Urban Edge that day. But after all the money I saved, I’d just clocked in for the equivalent of $500 an hour. I went from feeling very poor to very rich, thanks to volunteers like Jonathan – who do this job for free to help Boston residents.
—
Katie Liesener recently joined Boston’s Office of Workforce Development, and we told her the best way to learn about the Boston Tax Help Coalition was to pick a site and get her taxes done.