During the 2015 tax season, the Boston Tax Help Coalition, which is part of the Office of Financial Empowerment, conducted a Survey Inclusion Tablet Pilot Program at the Dorchester House Multi-Service Center free tax preparation (VITA) site. The goals of the Pilot were threefold: 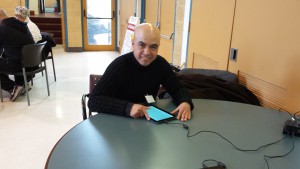 All of the goals of the pilot were met. The survey was translated into three languages: Haitian Creole, Spanish and Vietnamese. Taxpayers welcomed this change and although many did not use the languages, the process worked pretty seamlessly. Those with disabilities were pleased with the tablets and used the tablet effortlessly to take the survey. This is a far superior method compared to paper surveys with pencils. Utilizing the tablet as a replacement for paper surveys was a success. Eighty-three percent of the participants considered taking the survey on the tablet easy or very easy, and 85% percent of participants said that if they had the option to take the survey again, they would prefer taking it on the tablet instead of on paper.

For this pilot, the hard-copy intake survey was converted into inexpensive tablet computers for taxpayers to complete. The hard-copy survey has 36 questions packed onto a single double-sided piece of paper, whereas on the tablet, participants could view one question at a time. The tablet allowed the 33% of participants that were not native speakers of the English language to have a translated version of the survey, which was not an option in the hard-copy survey due to the cost. Using tablets allows clients to input their answers directly into a database, making it immediately available for analysis.